The period of publication covered is from the early 18th century to the mid 20th century and they represent a snapshot of ordinary people’s reading over a period of almost 300 years.

The miners were sympathetic to the Free Church of Scotland, founded in 1843, and they looked back to the traditions of the Covenanters who had been Bible readers which, in turn encouraged the development of literacy. This then developed into the reading of secular nonfiction: history, travels, biography and other secular subjects.

This was followed by a growing interest in imaginative literature, plays, poems and fiction. This process was completed by the late 18th century. Most working class libraries did not buy vocational books but Leadhills was an exception and early purchases included books helpful to the miners in their work. This did not last long however and the miners soon adopted a policy of buying general literature as was the case all over Scotland.

The buying of books about mining and related subjects did not return until the late 19th century. By this time miners too had also become interested in politics and social questions. As well as mining the miners were also smallholders and they bought books on gardening and husbandry and even identified with Irish land reformers.

Although London was and is the main centre of book publishing in the UK libraries like Leadhills are valuable repositories of locally and regionally published books and editions.

The library contains books published  in the 18th century by the Morisons of Perth, The Foulis brothers (Glasgow) and Wilson of Kilmarnock, Robert Burns’ first publisher.

Until the mid 19th century books were expensive and often published in small editions.

From mid century onwards the situation improved with changes in the publishing industry, the coming of machine printing and the spread of railways which reduced carriage costs.

Cheap reprint editions began to appear, all of which made books more affordable. 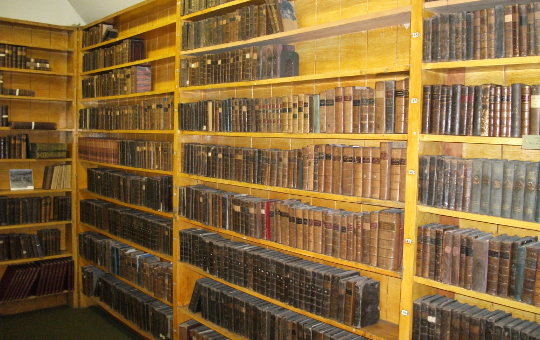 Between about 1860 and 1930 the Ferguson Bequest Fund, a charity, which still exists today gave grants of books to rural community libraries in the West of Scotland. Annual grants of up to £10 were given and recipients selected books from a list sent out by the Fund.

The books on offer included high quality non-fiction which was a welcome addition to the stocks of these libraries. We hold over 600 Ferguson Bequest Books which is the largest collection surviving in Scotland and we can fairly claim to hold the National Collection of Ferguson Bequest books.

Annals of the Old Testament, deduced from the first origins of the world

The library’s oldest book although it was never formally added to the collection.
It is a chronology of the history of the world and is famous for dating the creation of the world to 23rd October 4004 BC. 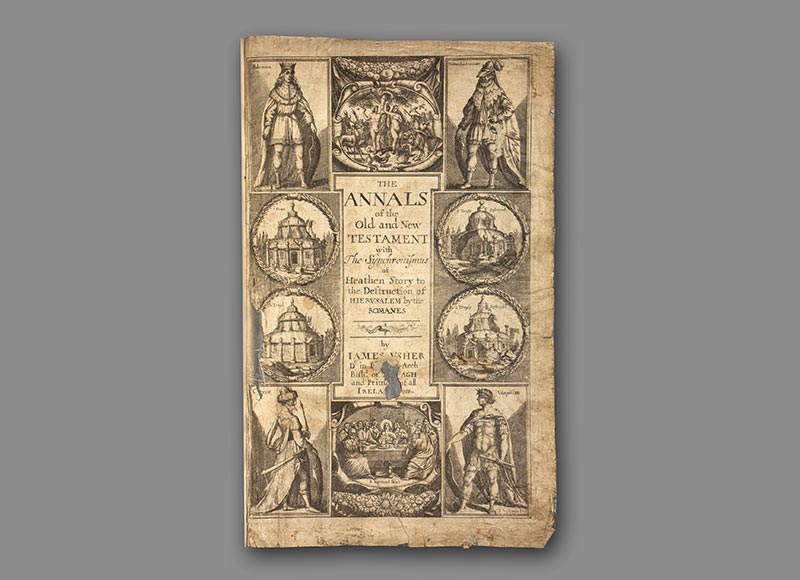 A Description of the Western Islands of Scotland

This is one of the library’s oldest books and one of the first accounts of the Scottish islands. Martin Martin came from Skye and presented an insider’s view of the Gaelic world he described.

It is still used by historians today as a primary source. It has been reprinted many times since its original publication.

The publication date is a misprint as it was actually published in 1703. 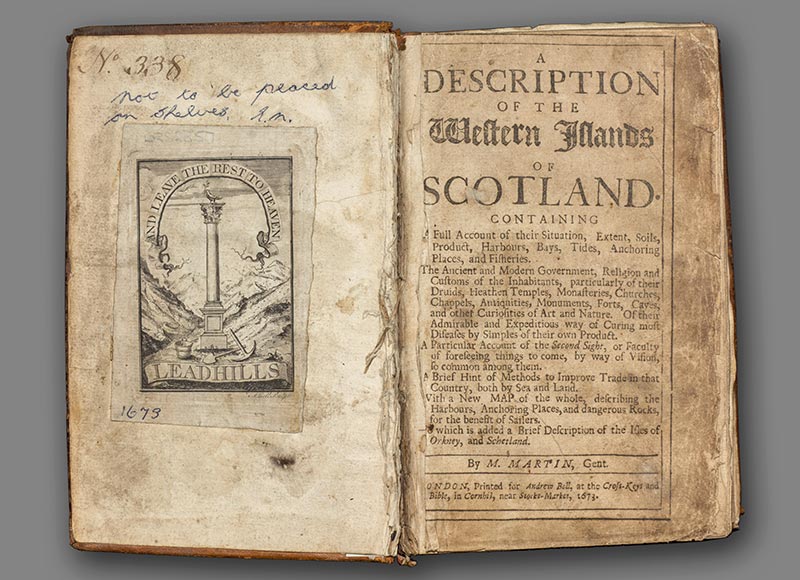 Philosophical Transactions and Collections to the end of the year 1700

The Philosophical Transactions was the world’s first scientific periodical. It was published by the Royal Society of London and first appeared in 1665; it still continues today. It would have been read by the mine managers to help them in their work who, despite the remote location of Leadhills, would have been fully up to date with contemporary developments in scientific thought.

The use of Philosophical in the title refers to ‘natural philosophy’ the contemporary term for science. The subscription seems to have been discontinued in 1749 by which time the miners seem to have become more active in the library’s management with the result that the library’s stock became more general and less technical. 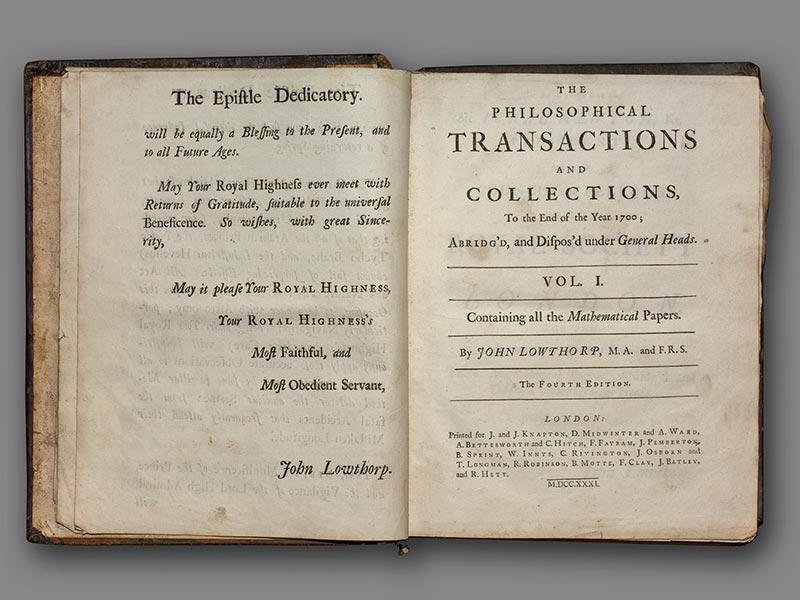 The Scots Magazine is the oldest magazine in the world still in publication and is important in world publishing history, not just in Scottish history. This volume contains the first issues. The Scots Magazine subsequently reported on such varied issues as the Jacobite rebellion of 1745, the Napoleonic Wars and more recently, the creation of the Scottish Parliament. 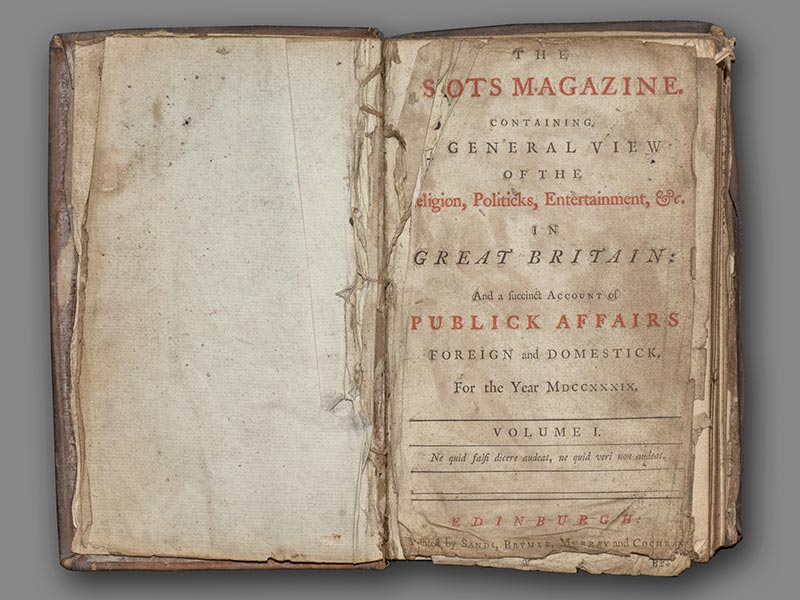 Elements of the art of assaying metals. In Two parts.
The first… The Theory. The second, the practice

Johann Andreas Cramer (1710-1777) was a German metallurgist who was born in Quedlinburg in what is now Sachsen-Anhalt in central Germany. He subsequently became a professor of Chemistry and Physics at Leiden University in Holland.

Elements of the art of assaying metals was originally written in Latin and this is the first edition of the English translation.

It is likely that early technical works were bought for the mine managers, rather than for the miners and the managers acquired books to help them in their work. The early library stock contains a surprisingly large number of translated works. 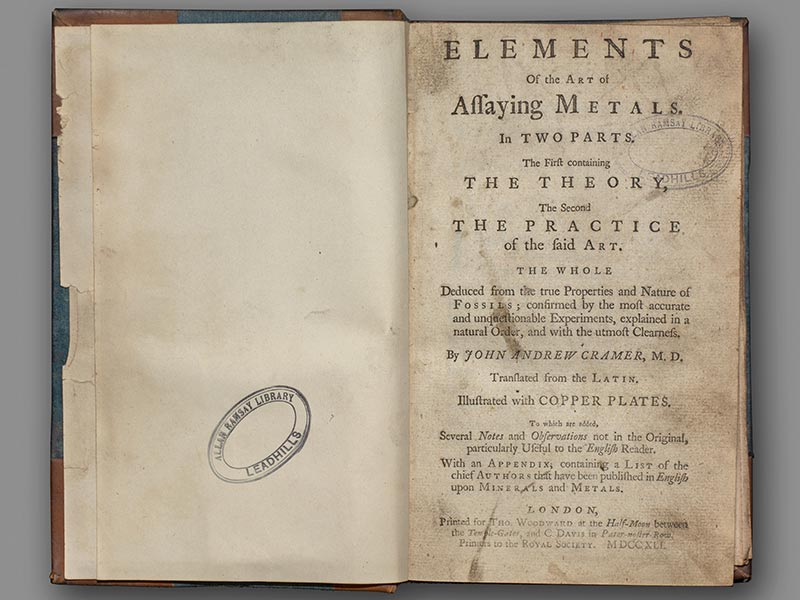 A Tour thro’ the whole island of Great Britain

Daniel Defoe (1660 – 1731) is best remembered for his novel Robinson Crusoe but A Tour… was his most successful excursion into nonfiction. It was originally published in three volumes between 1724 and 1727. There were two more editions after this one, in 1753 and 1761. Almost the whole of Great Britain is described in the Tour. Defoe may not have visited all these places himself but he was drawing on his experience as a soldier, businessman and spy in writing it. However it is regarded as a primary source for historians today and is still in print. 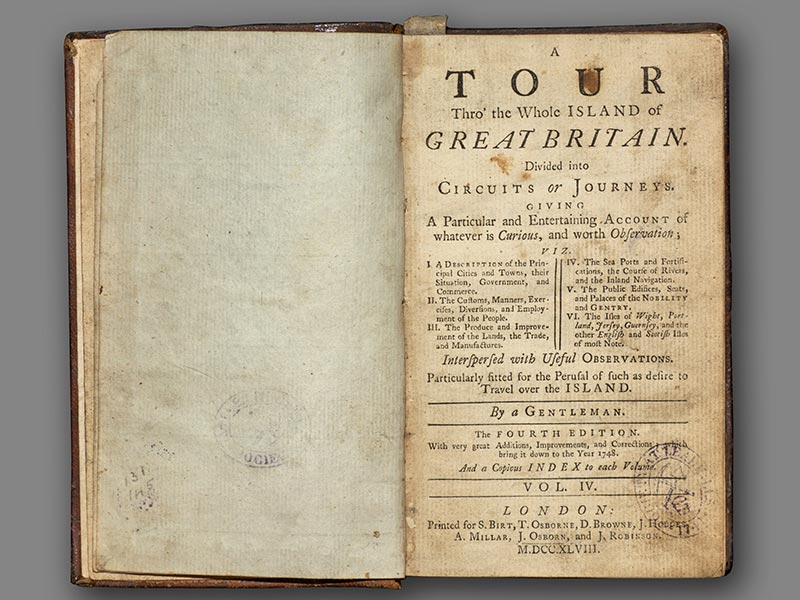 An account of Corsica: the Journal of a tour to that island; and memoirs of Pascal Paoli.

This first edition of this book, which went through three editions within twelve months, first brought James Boswell (1740 – 1795) to public attention twenty three years before his better remembered Life of Samuel Johnson.

This is a surviving copy of a first edition of 3,500 copies which sold out within six weeks. It cost 6/-. It was the result of a visit Boswell made to Corsica in 1765 which had been conquered by France. The book is a campaigning work which aimed to raise awareness of the plight of the Corsicans among the British people. 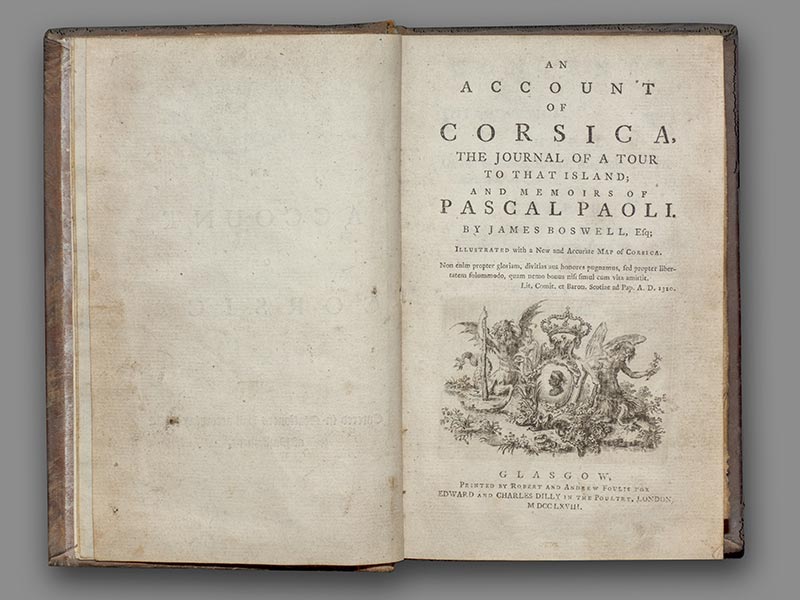 The Last of the Lairds: or, the Life and Opinions of Malachi Mailings Esq.

The library members in the nineteenth century prided themselves on their excellent collection of Scottish authors and this first edition of The last of the Lairds is a fine example. John Galt (1779-1839) was a prolific writer and colonial businessman who founded the city of Guelph in Canada. He is best known, however, for his depictions of Scottish rural life and this novel describes the trials and tribulations of a traditional Scottish laird in the changing world of the 1820s.

He was also fascinated by political manipulation and corruption which is reflected in a classic novel of local government corruption, The Provost, published in 1822. Surprisingly enough he got his first taste of political manipulation during a censorship controversy at Greenock Subscription Library while he was still a young man, events which are described in his Autobiography (2 vols. 1833). 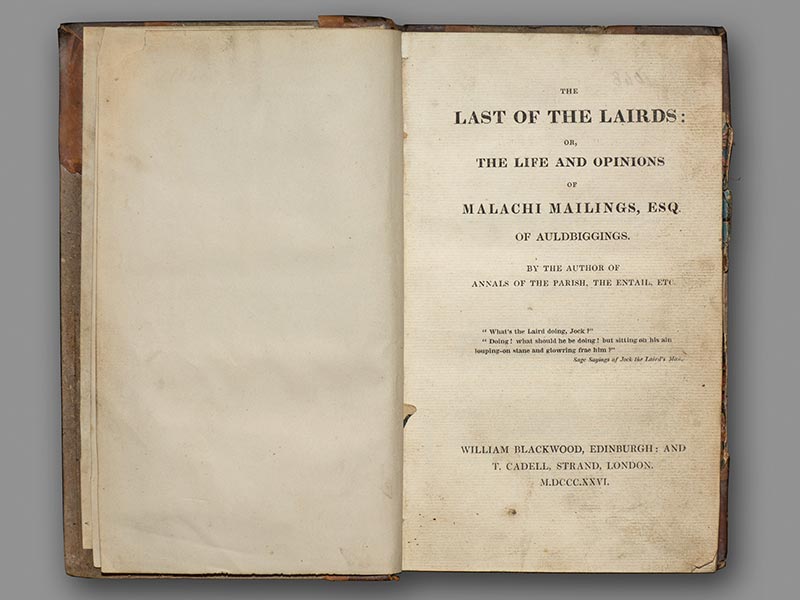 Anthony Trollope (1815 – 1882) was one of the most successful and prolific authors of Victorian Britain. This is a first edition of probably the most popular in the Chronicles of Barsetshire series which satirises the conflict between High Church and Evangelical factions within the Church of England in the mid 19th century.

Perennially popular it has been the subject of numerous radio and television adaptations and is still in print today. It is another example of a ‘three decker’ novel. 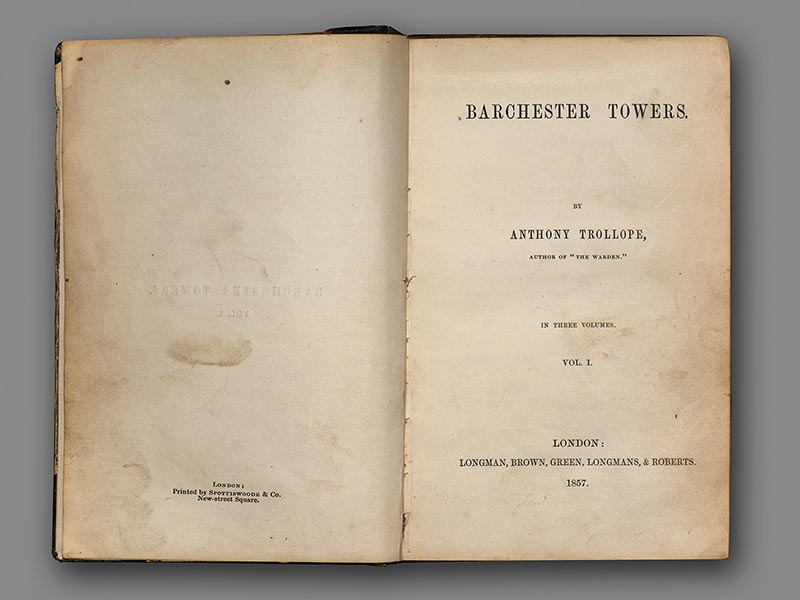 The Martyr Graves of Scotland: being the travels of a country minister in his own country

John Henderson Thomson (1824 – 1901) was a Victorian clergyman who travelled round Scotland, often visiting remote and inaccessible locations, to describe and record the graves or monuments of 17th century Covenanters. He was the Victorian equivalent of John Howie of Lochgoin, whose farm was one of the places he visited on his travels. 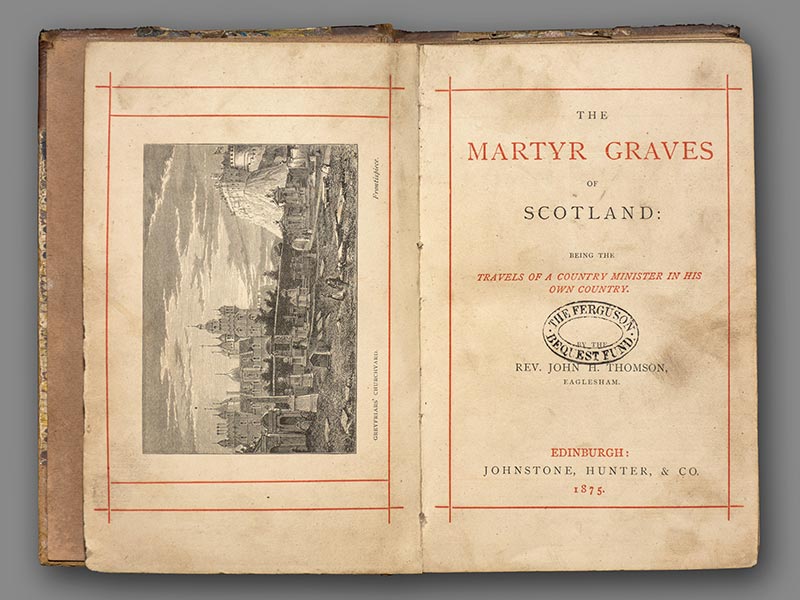 The Aeroplane in War

Claude Grahame-White was both a pioneer aviator and aeroplane manufacturer who managed a major military aircraft manufacturing plant at Hendon in North London during the First World War. This is one of the first books ever written about the military possibilities of aeroplanes. 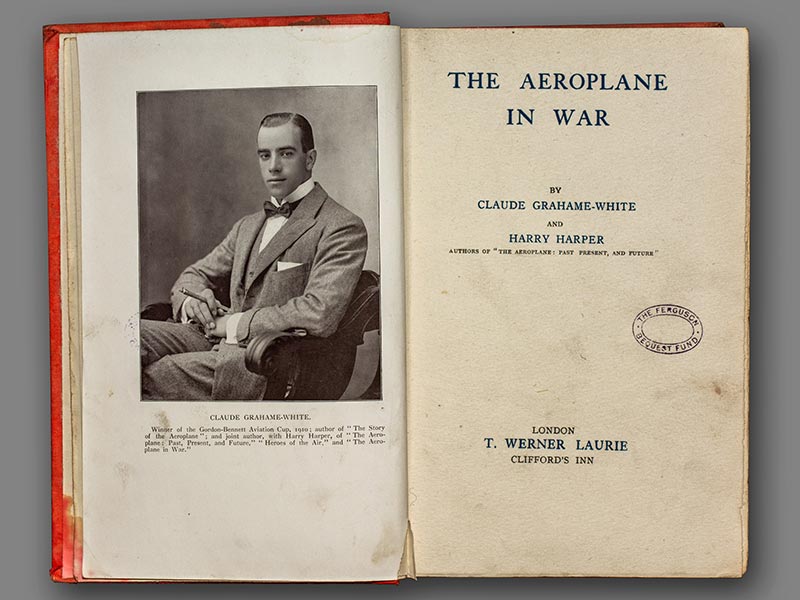 The History of the Working Classes in Scotland

Tom Johnston (1881 -1965) was a pioneering socialist politician, MP and Cabinet minister. He helped launch the left wing journal Forward in 1906 which published this book which depicts the rise of the Labour movement in Scotland.

He served as Secretary of State for Scotland during World War Two and introduced the hydro electric schemes which brought ‘power to the glens’. 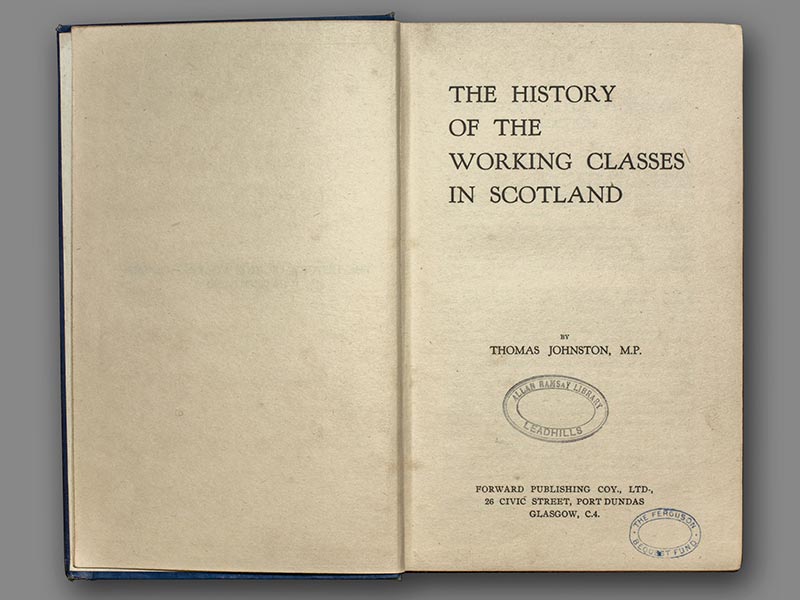